“Did you finish the book? How was it?” My husband asked after finding me lying down on the futon, a closed book beside me.

“The guy that the girl had a crush on turned out to be a witch and they unearthed the remains of his ancestor, triggering the apocalypse. Then the guy turned into a leopard and left the girl on top of a frozen mountain and she sold her soul to a fire demon to protect her people.”

To which my husband responded with a slow, skeptical “…Okay.”

“And that was all in the last chapter.” I added helpfully.

I love the YA genre, I really do. But I miss the days when you could finish a book, close the cover, and bask in the glow of completion, of satisfaction, of the knowledge that the story was at a close and all was well.

I don’t get to feel that a lot anymore. A typical story has an intro, a disaster, rising action, a climax, and then a brief denouement. But YA fiction that I’ve been reading lately has altered the structure, pushing the climax until the very last page and then bringing the curtain down with no resolution. Why? Because they want you to read the next book in the trilogy (and it’s always a trilogy).

It seems that our notions of story structure have changed. Not just in pushing back the climax either, but in our apparent inability to tell just one story.  YA authors can no longer write just one book, now it has to be a trilogy, and the fate of the world has to be at stake. I suffer from this too – every time I start to think about a new story idea, I picture it in three installments. I don’t know why.
We need to think smaller, work harder on writing good stories instead of epic ones. The Thief is my favorite book of all time. When I finished it, I could barely wait to get my hands on the sequel, not because of some dramatic cliffhanger that the author created to sucker me into reading more, but because I genuinely enjoyed the story and loved the characters. I couldn’t wait to go on more adventures with them. That’s how you sell more books – not by using emotional blackmail, but simply by being a good writer.

For the record, I have nothing against the book I was reading (Even the Darkest Stars) or any of the things in it. I’m frustrated at the genre as a whole, that it’s becoming so rote and formulaic and over-the-top. We need to think smaller and go back to the basics of what we love about stories – not the drama or the extended action, but the characters and the twists and the simple love of story.

Posted by Leah Christine at 11:04 AM No comments:

Email ThisBlogThis!Share to TwitterShare to FacebookShare to Pinterest
Labels: calm down, fantasy, make me care, me complaining again, trilogies, ya

This book holds a special place in my heart. It was the book that made me love Queen Mary I. I think I was around 12 when my mother took me (just me, none of my other siblings) on a special trip to a book fair in Arlington, TX. After a whole day with my mom spent picking books to love and learn from, I sat up in my giant hotel bed all night long reading. I couldn’t put it down. I think I finished it at 2 am.

Mary’s is a literal Cinderella story as she travels from riches to rags to (eventual) riches again. As the only surviving child of Henry VIII and his queen, she is the sole heir to England’s throne. She is engaged to an emperor, beloved by all, her father’s ‘pearl of the world’. Then Henry casts his eye on Anne Boleyn, and Mary’s life – and the entire course of English history – are forever changed.

Most kids know the story; Henry discards Katherine in favor of Anne, kicking off the Protestant Reformation in England. Anne becomes queen, and the future Elizabeth I is born. From the perspective of Queen Katherine and Princess Mary, this is a disaster.

Mary’s privileges are gradually stripped away as Anne gains more and more power. Demoted from a princess to a mere lady, she loses her allowance from her father. He refuses to see her. No longer permitted to see or even write to her mother, Mary must fend for herself in Anne Boleyn’s court. Eventually she is made to work as a servant for her new little sister, and even imprisoned, under constant pressure to renounce both her Catholic faith and her own legitimacy.

In the face of isolation and constant persecution, Mary never falters. Stubborn and loyal to her faith and her mother, she endures without fighting back. Reading her side of the story turned me into a staunch defender of England’s most maligned queen. Elizabeth is overrated, folks.

If you're going to give your kids books, give them historical fiction. Books like this not only present them with both history and heroic characters, they also remind us to look at history from different angles and reexamine what we know. I did a lot of research to find out how much of this book was true (and to fuel my dislike of Elizabeth). 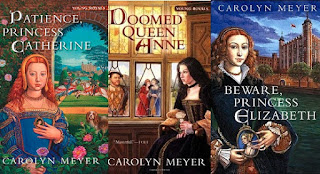 I devoured this book in one sitting, so obviously it gets a yea from me. But I found that the other 3 books in the series were not nearly as good, as they all contain more adult themes (Elizabeth’s affair with her stepmother’s husband, Anne’s affair with Henry, Katherine’s wedding night with Prince Arthur) that I didn’t care for. They weren’t even titillating to me as a teenager they just felt…sordid. And melodramatic. I don’t recommend any of them.
Posted by Leah Christine at 10:07 PM No comments:

Why can’t girls get a decent love interest?

I know I harp on romances a LOT, but, well, there are a lot of them out there, most of which are either boring or fall somewhere on the abuse spectrum. For whatever reason, boys in books rarely seem to live up to my standards. Harry Potter particularly stands out in this.

Think about Hermione Granger for a moment – she’s one of the smartest witches of her age. She’s powerful and pleasant and eager to please. She’s compassionate and hungry for learning and a stickler for the rules. Is she pretty? That’s up for debate. But it’s evident from the books that she’s a very eligible young woman, well regarded by most people she meets (racists aside). How many young girls, also raised to be kind and to please others, longing for acceptance and not sure of their worth, projected themselves onto her? I know I did.

Which is why I found myself so fundamentally disappointed in her options when it came to men. I was far too young to date when I read Harry Potter, but I was certainly old enough to be dreaming about it, setting my own expectations for future romance. I wondered at the time if my disgust at the idea of dating Ron, Harry, or Cormac was unfounded, if I was being a little too romantic and naïve.

Well, now I’m all grown up and married and I can say that I was not too naïve. Hermione’s options suck. Why can’t J.K. Rowling give a girl a break?

First, Hermione has Ron. His virtues include being loyal(ish) and not a racist. His cons are that he’s jealous, insecure, petty, and repeatedly belittles Hermione for her intelligence and her passions. Rowling herself admitted that Ron and Hermione would never survive as a couple.

Then there’s Harry, who I can’t technically call selfish because of the MASSIVE TRAUMA he lives with. But when he’s in good mental health, he’s boring, and when he’s not, he is certainly not someone to date. I was always kind of meh about Harry.

Hermione also dates Cormac Mclaggen, a nice-looking piece of garbage, and Viktor Krum, who is the literal incarnation of healthy romance yet somehow gets shunted aside for reasons I’m not sure were ever stated.

Why, Jo? Why is a girl like Hermione, who does have flaws but is nevertheless unusually smart, kind, and capable, still written into relationships that would so obviously be bad for her?

The problem doesn’t stop with Hermione, unfortunately. Lily Evans is the middle of the other big love triangle in the series. Ever since Harry Potter and the Deathly Hallows was released, fans have been raging at each other over whether Lily should have chosen James or Snape. James was a privileged bully who mocked her friends in school, and Snape is an actual Nazi. And again, Lily is supposed to be smart, talented and beautiful – so why should she settle for either?

The question I’m left asking is why won’t Rowling give her girls decent love interests? It’s a puzzle, especially given that Rowling admitted that Hermione was a sort of self-insert.

I know. It’s just a book. They’re just fictional. But is it? Is it really? As I grew older, I dated men, like Harry, who were nice but completely boring. I’ve worked with guys like Cormac, who were just…not nice, and yet expected me to be nice enough for the both of us. And I’ve struggled with guys like Ron, who were insecure and dealt with it by trying to make me feel small. And I let them! Isn’t that what Hermione did? Hell, isn’t that what most fictional girls do?

Fiction is never really fictional, is it? We write this way because this is the world we know. Boys sins are shrugged off while female excellence is played down. Hermione can’t get a decent love interest because ‘it isn’t realistic’, because ‘boys will be boys’ because ‘she wasn’t perfect either’. Because boys, real boys, are constantly being told that they can do whatever they want to do, that their mediocrity makes them deserving of the best and brightest woman who exists. And girls are raised expecting to date a half-formed manchild, told to give a guy a chance, encouraged not to be frigid or stuck up, raised to be pleasant and obliging. And then those privileged boys and pleasant girls grow up and interact and sometimes write stories the teach the next generation to be the same.

No. I’m tired of it. I don’t want that for my daughters or for my sons.

Romantic relationships need to be:

Am I a romance expert? No. Am I a little bitter Hermione didn’t end up with Krum? Yeah. Because when I was reading those books, I was Hermione. And I wanted a man who respected me just as I was. Krum or not, Hermione deserved better.

Posted by Leah Christine at 3:05 PM No comments: